India’s mobile industry is magnificent but also a mess

A very interesting article from the Economist that I thought I ABSOLUTELY had to re-post.


India’s mobile industry is magnificent but also a mess 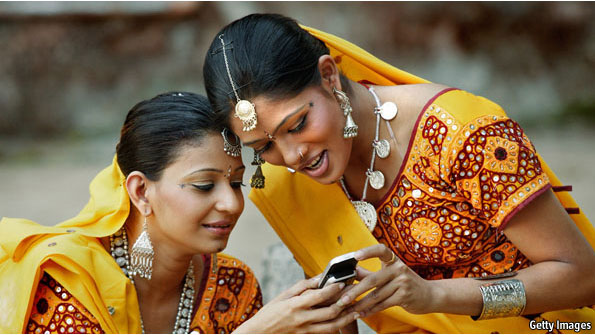 IN A Vodafone shop in Mumbai earlier this year, you might have been forgiven for thinking that one of the great clichés about India wasn’t true. The national cricket team was playing Pakistan; the biggest grudge match in any sport, anywhere. Yet the mobile-phone store was still bustling, with customers debating calling plans, not leg-before-wicket decisions.

A visit the next day corrected the impression that Indians have lost interest in cricket. Without a match, the shop’s tempo had roared back to its normal level: that of a siege, with a mob baying for itemised billing and BlackBerrys.
India has almost 600m active mobile-phone subscribers—about one for every two people, including babies. It also has among the lowest prices anywhere, and a home-grown, world-class operator, Bharti Airtel. India’s mobile-phone industry inspires great hopes. Many see it as vital to the nation’s development: a way of bypassing obstructive bureaucrats and bringing services to the masses, from mobile banking to accurate crop prices. Already a third of subscribers are in rural areas. Mobiles bring the whole world to villages in Uttar Pradesh.

Yet frustration grips many mobile executives. After new 2G licence awards by the government in 2008 (now the subject of a huge corruption probe), India has more than ten operators in most of its 22 geographical licence areas. Most countries have only three to six. Indian firms must typically make do with slugs of spectrum half the size of those issued to peers in less crowded countries. As a result, claim executives and investors, returns on capital stink like the drains in Kolkata.

Nice for nattering nabobs
Hyper-competition is good for natterers, of course: prices have fallen to a level the poor can afford. Firms have become leaner, too. Bharti outsources furiously. Most companies share radio towers and have learned how to compress traffic.

Yet the industry is right to fret about returns. Only one of the big four firms was close to recouping its cost of capital last year (see chart 1), as the price war hit margins and an expensive 3G spectrum auction in 2010 bloated balance-sheets. Vodafone has a rich parent company but the others are now uncomfortably indebted. Middle-sized operators, meanwhile, are thought to be bleeding badly. Of the small fry, only two disclose figures: Uninor, run by Telenor, a Norwegian firm; and Russian-backed Sistema. Together they lost almost $2 billion of cashflow last year. Both say they are in India for the long haul.

Weak returns are bearable if the market grows and the rules are clear. Long-term growth seems certain, but India’s spectrum regime, once admired, is now an embarrassment. A roundtable with the new telecoms minister and mobile-phone executives in March revealed a fog of confusion about vital issues: the fees on existing spectrum, the terms on which old licences are renewed and corruptly awarded ones relinquished (if at all), new spectrum grants and the rules on mergers and acquisitions. It is also unclear whether non-voice 4G licences, originally intended for data only, some of which are in the hands of Mukesh Ambani, India’s richest man, will have their terms tweaked to allow voice services, creating even more new entrants into the mobile market.

The way India divvies up spectrum is unfair and erratic, which deters investment. It is also wasteful. About 30% of India’s granted spectrum used for GSM (the main flavour of 2G) is in the hands of operators with a collective market share (by revenue) of about 3%, reckons Deepti Chaturvedi of CLSA, a broker. With spectrum tight, big operators say they must build denser networks than they might otherwise. One boss thinks the extra cost for the industry is billions of dollars a year.

The auction of spectrum for 3G services in 2010 was clean and cleverly designed. However, it produced a stupid outcome. Four or five slots were sold in each geographic area—far fewer than the number of existing players. Only about 60% of existing 2G customers will be able to get 3G from their existing provider. If they want a fast data connection, they will have to dump their current operator or hope it can piggyback off a rival’s network. In short, India has encouraged lots of firms to enter the voice market and then ensured that many of them cannot offer the latest technology. At the same time, it makes it hard for the losers to sell up and get out.

If the market is too fragmented (see chart 2), consolidation is the only plausible cure. From Brazil to America, places with mosaics of technologies, operators and regional licences have cleaned themselves up. In India this process may not correct past injustices, but by allowing unviable firms and their spectrum to be acquired, a scarce resource could be allocated more efficiently and customers could be saved the annoyance of having their carrier go bust. Most executives expect a cull. After the scandal erupted last year, says one boss, banks cut off credit to the industry, making life hardest for the small firms that have yet to break even. The big operators have stepped back from price cuts, allowing industry revenues, which had stalled despite the boom in customers, to grow again.
But the industry cannot rationalise by itself: the state controls the supply of licences and spectrum. Will it enact sensible changes? Some worry that the 2G scandal could tar more executives and politicians, paralysing reform. That could damage the Indian economy. Still, the noises from Delhi are mildly encouraging. As the telecoms minister put it recently, using another cliché that happens to be true, “we cannot kill the goose that laid the golden egg.”