Does the impending Indian 3G auction signal the growth of Android in India? 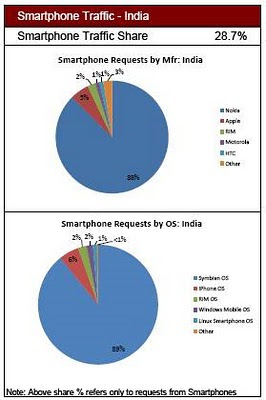 India is poised to launch its long-delayed auction of third-generation mobile phone spectrum in what is likely to be a closely fought battle between local and international operators.
The government has set April 9 as the date for the auction, which is expected to be a four-way tussle between domestic market leaders Bharti Airtel and Reliance Communications and foreign-backed Vodafone Essar and Tata DoCoMo.
Delayed for years by bureaucratic and political infighting, the auction is expected to provide an additional boost to the already rapid expansion of the mobile industry in India, which is the fastest growing large market in the world.
With this backdrop, it is interesting to look at AdMob's recent report on Smartphone requests in India. It is clear that for now Nokia / Symbian are the kings of this dynamic and rapidly growing castle. But Nokia's 3G product portfolio is far from robust. As the Indian wireless subscriber becomes more familiar with (a) smartphones, and (b) the possibilities of wireless 3G services, will we begin seeing an erosion in Nokia's marketshare? If yes, who poses the greatest threat to Nokia? In India, the iPhone is sold at a price point thats out of reach of most Indian wireless customers. Do the winds of change, therefore point to the rise of Android in India?