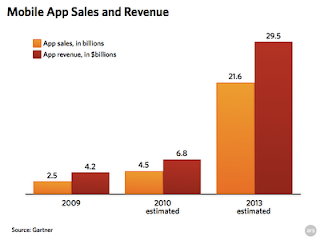 Anyone owning a mobile phone these days can tell you that a phone is only as good as the applications (apps) it can run. With mobile subscribers voracious appetite for apps, and their demonstrated willingness to pay for it, it is no surprise that the entire ecosystem (from app developers to device manufacturers to wireless carriers) wants a piece of the action. But so far, no one has successfully managed to launch and monetize an app store as well as Apple has. 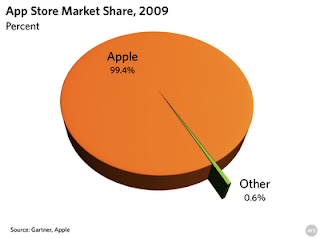 There have been a few good, although fragmented attempts by device manufactures to develop App stores of their own. BlackBerry Appworld, Palm App Catalog, Nokia Ovi Store, etc. are examples. And who can discount Andoid? But a look at the graph alongside shows that for now, Apple has an iron-grip on the market.
Enter, the wireless carrier. On 15th February 2010, a host of wireless carriers like AT&T, Orange, Telefónica, China Mobile, Verizon, Sprint, Bharti Airtel, and several more carriers have announced the formation of the Wholesale Applications Community, which aims to create a viable alternative to Apple's walled-garden approach to apps. They'll be joined on the hardware side by LG, Samsung, and Sony Ericsson as they attempt to create an open system for app development and distribution. What they lack in momentum they make up for in mass: combined, the alliance services more than three billion customers worldwide.
As I noted earlier, the amount of fragmentation in the world of apps has only been increasing, so it should be a relief to developers and consumers to see an effort to streamline the process while at the same time opening it up. It'll be interesting, though, to see how quickly and effectively they can pull actual standards together. With that many chefs, it can be hard not to spoil the soup.